The Pied Crested Cuckoo is referred to as the Harbinger of
Monsoon in India. It is usually called as
"Chatak". This Cuckoo appears days before the
monsoon.
Even though as the monsoon seems to have taken a short
break for the benefit of our city folks, Bhramanti is
pleased to present you the complete monsoon trek schedule.
We hope that the intermittent showers keep pouring on us
& we continue to savor the beauty of the blooming
nature around us.

Following are the various Bhramanti Activities this season: 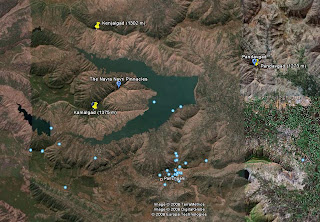 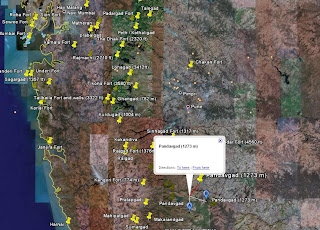 As usual, we expect maximum participation from all the
enthusiasts. Lets break from our routines & celebrate
the season once again!

Wish you all Happy Trekking.

Gentle Reminder:
Request you to renew your membership if not done. You have
the option of going in for annual, 7 yearly or life
membership.

Surgad [Mr. E. H. Moscardi, C. S.] or God's Fort (T. Roha) in the north-east of the Roha taluka and eight miles east of Roha town, consists of a long and exceedingly narrow spur running south from the range of hills which separates Roha from Alibag and Nagothana. On either side stretch flat rice lands from which the hill is separated by a thick belt of forest. Towards the top the hill becomes a mass of compact dark basalt, almost bare of vegetation. Between it and the main range of hills on the north runs a ravine or chasm about 150 feet deep, and to the south the spur stretches into a low range of woody hills, which, after about two and a half miles, fall into the plain near the village of Poi.

From the north, east, or west, the hill is singularly bold and rugged, sheer walls of rock without a trace of masonry. Surgad can be climbed either from the north or from the south. From the south the path leads up the western face of the spur, over rocks and brushwood, to a nearly level grassy ledge, on which stands a modern temple of Ansai Bhavani. Leaving the shrine on the left the path leads to the southern end of the fort, along the face of the rocky escarpment, which is the chief and in most places the only defence of the hill. Probably the path was once provided with a flight of stone steps. A few remain at the bottom of the escarpment, but most are gone and all that remains on the rock are a few made holes. The hill-top is singular, a nearly level ridge about three quarters of a mile long and nowhere more than 150 yards broad. By this path the entrance to the fort is about 800 yards from the south end of the ridge. This part of the fort contains very little of interest. It is almost separate, a natural bastion with a. small rectangular reservoir, which is said never to hold water after the end of March. There is also a ruined temple of God Maruti, of which the plinth and a large image of the god are all that is left. This point commands an excellent view to the south and east. To the south a long wooded spur runs from Surgad close to the central range of hills, which divide Roha into nearly equal parts. From the narrow space between them, the Kundalika or Roha river can be traced east to near the point where it issues from the adjoining Sudhagad peta. Close behind this point, two hills, of no great height but of somewhat striking appearance, mark the village of Jamganv in the extreme east of Roha. North of these are two other little detached hills, close to the village of Kudli. Behind them, a series of parallel spurs stretch, from the line of the Sahyadris, north, till they are hid by the range of the hills to which Surgad belongs. Near where they disappear is the fortified peak of Kurdu or Visramgad on the border of the Manganv taluka.

Passing north along the ridge of the hill the first building is a small ruined shrine of Mahadev with a crude bas-relief of Parvati and a nandi or the sacred bull about forty yards to the south. Just beyond this is the only fairly preserved building in the fort. It is roofless, but its walls which are about two feet thick and substantially built are almost entire. It consists of one large inner room with doors on the east and west, leading into verandas, which run north and south along the building. The length of the building from north to south is about forty-five feet, the breadth of the inner room east to west is about thirteen feet, and each of the verandas is about six feet wide from east to west. The whole width of the building is about thirty feet. The shape of the walls shows that it had a pointed roof whose ridge ran north and south. This building bears the name of the Andhar Kothadi or Inner Room, and seems to have been used as a treasury or storehouse.

To the north of this treasury, close to the west edge of the hill, is a rock-cut cistern divided into two compartments by a wall of solid rock. To the east of this cistern, on the eastern edge of the hill, is a Musalman dargah or shrine said to be dedicated to Par Pir. At the south-east corner of the shrine enclosure is the tomb of the saint built of large oblong blocks of stone. In the centre is a little model of the dome of a mosque about eighteen inches high cut out of a single stone. About fifty yards to the north of the tomb are a group of five rock-cut cisterns each about twelve feet deep. Two of them are dry and partly filled with rubbish. A little to the north of the cisterns are the remains of the command-ant's house or sadar. The plinth forms a square of about sixty feet, and is approached on the east by a broad flight of stone steps. The house had no central open Court, but was entirely roofed and had windows in the outside walls. About thirty yards to the north of this building is a slight hollow or chasm in the ridge, about seventy yards broad, across which is thrown a platform or causeway. By the side of this causeway, near the edge of the hill, is another rock-cut cistern with three dividing walls. This causeway commands a wide view to the west, between two ranges of hills, along the valley of the Kundalika to within about six miles of the sea. In the southern range the position of Roha is shown by the wall of the mamlatdar's office, and, among the peaks of the northern range may be noticed Medha (Avacitgad) fort. Close at hand, the lower slopes of the hill are adorned by picturesque wooded hillocks.

From south to north the ridge of the hill has a slight but steady upward slope. To the north, immediately beyond the platform or causeway near the sadar, is the highest part of the hill which forms the citadel or buruj. It is triangular in shape, each side about 150 yards long, the base of southern side being towards the east of the fort, and the two other sides being bound-ed by the slopes of the eastern and western escarpments. Near the south side is a small rock-cut cistern. On the south and east sides a massive wall of masonry, about twelve feet thick, bulges at the north and south-east corners, into two large circular bastions, strengthened outside by strong masonry buttresses. There are no embrasures for cannon. Near the south-east bastion, a block of stone lying on the ground within the fort has an inscription in Arabic and Devnagari. It seems to have fallen from a niche in the wall. The inscription records that the fort was built in the beginning of the second year of the command of Sidi Saheb, the architect being named Nuryaji, and the governor of the fort Tukoji Haibat. Between the two bastions there is a niche in the wall in the form of a pointed arch. The third or east side of the citadel is not protected by any wall, the rocky escarpment, which is here nearly perpendicular and of enormous depth, being a complete defence. From the northern end of the citadel a rocky path, no better than cattle-track, leads to the valley below. In fact the fort is nearly inaccessible on all sides. It seems to have been built at a time when siege artillery was unknown, for it would be easily commanded from the height on the north by any assailant possessing ordnance of any size. In February 1818 Surgad was taken, along with Avacitgad by Colonel Prother's force [Nairne's Konkan, 114; Pendhari and Maratha Wars, 208.]. Besides the building described above, there are several other small ruined houses. Local tradition ascribes the building of the fort to Sivaji.