on July 12, 2008
iTrekz would be conducting this event coming August!
Boarding the Mumbai-Kolhapur Mahalakshmi express on Thursday night (14th August) which leaves from Mumbai at 8.20 PM we reach Kolhapur on 15th August at 7.20 AM.

We would catch a bus and reach Panhala by 9.30 AM. We are already a day short on demand that most of us would not like to take leave from office either on Thursday or Monday! So A quick look and breakfast atop Panhala is allotted 2 hours. Actually Panhala offers much more to see but this particular event is about trekking and trying to reach Vishalgad that too in a short time span!

So we would leave Panhala by Pusati Buruj at around 11.30-12.00. We would then reach Mhasai temple and have our lunch at around 1.30 PM. Later a long day awaits for a long trek and we would try and camp at Karapewadi or further at Aardewadi for our night halt. It would require around 5 hours trek to reach there from the Mhasai temple.

Next day we start early and reach Patewadi for our break fast before 9.00 AM. Then via Pandharpeni (our lunch at around 2.00PM) we would try and reach Pawankhind at around 5.00 PM. The day is long and trek a tiring and would require around 10-12 hours of walking without including the intermediate breaks! After paying our obeisance at the Pawankhind we would try and reach Gajapur by 8.00 PM on Saturday itself! It would be our stay for night halt.

Sunday again starts early and we would do Vishalgad and our return journey to Kolhapur. We would be boarding Kolhapur-Mumbai Mahalakshmi express which leaves Kolhapur at 7.25 PM. We would reach Dadar onMonday at 7.00 AM and head back for our respective work domains!

We would soon be collecting sums for the upcoming mega event for reservations and other preparations! The cost of the trek would be 1200 Rs and would be collected this week since train reservations and everything needs to be prepared well in advance! So kindly contact: Dr. Shailendra Acharya on 9975373107.

Agra escape, Afzalkhan's murder, and escape from Panhala! Shivaji was under siege of Siddi Johar on Panhala fort. The siege lasted long and all food stocks had finished, and it made things difficult for Shivaji. It was impossible to defeat the 30000 soldiered troop of Siddi. Shivaji with some 600 mavalas decided to escape to Vishalgad, some 65 kms away. It was Ashadi Pournima, with heavy rains falling. Shivaji informed Siddi that he would surrender hence the Siddi troops were little careless. Taking advantage Shivaji escaped from Panhala. He was not safe till he reached Vishalgad. It was some how that the Siddi's troops spotted Shivaji escape. Siddi immediately sent horsed troops behind him and they got hold of Shivaji, who was later brought to Siddi's camp. But it was Shivaji's game plan; person whom they had caught was not Shivaji, but Siva Navi who was immediately killed. Siddi somehow came to know that Shivaji was on his way to Vishalgad, and so sent troops behind him. Shivaji knew that Siddi's troops were following him. Baji Prabhu, Shivaji's loyal sardar decided to stay in Ghod Khind with 300 mavalas, a col were mountain ridges near Vishalgad unite and was the only way to Vishalgad then. Baji with his 300 mavalas had guerilla warfare at Ghodkhind and held the Siddis troops there. They fought bravely till their death. It was only after Baji heard the canon fire indicating safe reach of Shivaji at Vishalgad, he gave his life. It was 21 hour continuous journey from Panhala to Vishalgad. Story didn't end here; Shivaji had to fight his way to Vishalgad. Vishalgad is a fort difficult to conquer, difficult to lay siege. Also even if siege was laid, one would have enough time to escape to Konkan. Siddi was building siege on Vishalgad, but Shivaji with his diplomatic trick made Adil Shah bring back Siddi Johar. 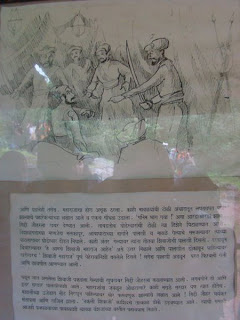